Bath Housing and the nonprofit Comfortably Home have helped more than 300 Midcoast seniors stay at home by upgrading their homes with handrails, shower seats and other safety features.

Those efforts continue as the agency recognizes national Fall Prevention Awareness Week, which comes the first week of the fall season.

“Installing handrails and shower seats, repairing stairs, weatherizing and improving lighting are just some of the basic improvements that make a critical difference in safety,” said McEvoy.

Working together since 2015, the two nonprofits have helped reduce the number of senior hospitalizations, 911 calls, and injuries, according to Bath Housing Director Deb Keller.

Keller said the program not only lowers the risk of injury, but also offers seniors more “freedom and independence,” allowing them to remain in their homes longer.

According to Maine Housing Communications Director Scott Thistle, the program served 201 households in 2021.

In addition to fewer hospitalizations, Thistle said the number of falls reported decreased by 89% that same year. 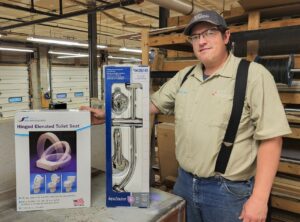 “We do safety checks. We are going to make sure they have smoke detectors, adequate lighting, clean furnace filters and laundry vents,” said Keller. “And help people create safe entrances and exits to their homes.”

Keller Bath Housing has five maintenance workers on staff, while one employee, Matt Thompson, is dedicated solely to the senior home improvement program.

“Our target is to do 75 homes a year. Any given week Matt is doing a couple of assessments,” said Keller.

Comfortably Home spends up to $2,500 for each participating home.

During his assessments, Matt asks, “How are you using your house, how can we help you use it better? What areas are you avoiding? Putting the homeowner in the driver’s seat,” said Keller.

One 87-year-old Bowdoinham resident, who asked not to be named for her security, said the service was life-changing for her after her husband died a little over a year ago.

The resident said Thompson cleaned her refrigerator coils, installed grab bars in her bathrooms, replaced her wireless doorbell, updated the carbon monoxide monitors, and assembled a new cabinet next to her water treatment system so she could better balance the bags of chemicals while pouring them into the system.

She said the most important upgrade was a newly added step to her back porch where she had a fall last winter. She said she hasn’t had a “stumble” since.

“All the people I have dealt with so far from Comfortably Home have been so nice and so courteous. They seem to know what they are doing which is good,” said Violette. “They have been respectful, especially with my mother.”

Violette said she and her brother do as much as they can in regard to cooking, cleaning, and trash removal, but having a service to help keep her mother safe is key.

Violette said she too has participated in the program and received safety upgrades to her own home, including new garage lightbulbs, added handrails in her showers, new smoke detectors, and treads for her front steps to prevent falls in poor weather.

“I appreciate so much that this is available for low-income people like myself. I think a lot of people don’t know this service is available,” she said.

To qualify for the program, participants must be 55 years or older or have a disability, be living on a fixed income of $56,000 or less, and must own their home or live in a home owned by a family member.